The construction because of the light rail on Woodward, or as I have heard it called "People Mover 2: Electric Boogaloo", is a real pain. But, a lot of super cool friends, supporters, and people who were there doing the run of White Noise, Fun, and Orbit came to pick up their copies of the book.

Union Street was gracious enough to offer their Michigan Room to me for the event. Plus, I had one of the best Mac & Cheese dinners since I got back to Detroit. You know how you know it was good? I was eating it cold, because I was so busy, and it was still great!

Getting Close and a Big Discount

It's getting exciting now, it feels like I say that all the time, but this time I MEAN IT!

The Orbit Magazine Anthology comes to finer bookstores Tuesday September 1st - just over a week away. 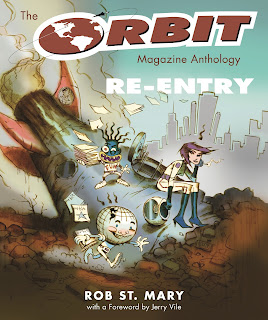 But, I wanted to let you know that right now you can get it a a big discount - 40% off the publisher's price at the Wayne State University Press website.

Orby Rises From the Grave (Kind of)! 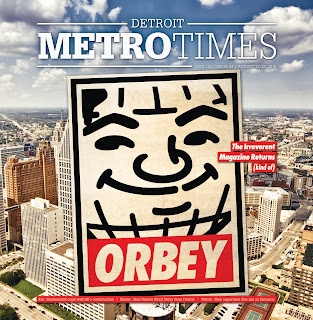 About a year ago a good friend, and man who helped to make the book possible by connecting me to Jerry Vile and other threads, Rick Manore started talking to me about the idea of an "Orbit Takeover" of the Metro Times.

I have to say, I loved the idea.

Here was a chance for Jerry and his crazy cast of creatives to run wild in the house of their competitor who pretty much had no love for Orby's family members when the original owners ran the joint. So, it kind of felt like not only do you want to do this... YOU HAVE TO DO THIS for the sake of history.

I've told the story so many times people are probably sick of hearing it. The story is how Kid Rock donated to my book campaign, received my original Niagara "Hot Box #1" painting as a gift, and decided to make it the cover art for his "First Kiss" album. If you want all the details, just click here and you can read how it all came to be.

Last night, my cousin Pete & his wife Angela picked me up and we headed out to Pine Knob, I still can't say DTE Energy Music Theatre, to check out show number two of the 10 nights of Kid Rock's record breaking home stand.

Pete & Angela are big Kid Rock fans. They have seen him many times over the years. My cousin says he remembers seeing Bob the first time in the transition days when Kid Rock was starting to put more rock into the shows back at Lipsticks, this low rent place on the east side on Groesbeck near 16 Mile. So, it was good to go along with folks who were in the spirit and having fun. But, even they were amazed at the amount of people that had a few too many at the show. For example, one guy sitting on the lawn near us was resting on a blanket when he just turned his head and, well, I think you get the rest. His friends looked on in horror. I told them they should check on him because "you know, John Bonham died like that." Too much fun for that guy... and that was before Bob even hit the stage.

Face-to-Face with His Story

Today, August 7th, was the day Jerry Vile had the chance to come face-to-face with himself through the pages of the book.

Before now, Jerry had read the text of the book with some descriptions of what might be on the pages in terms of reprints, images, and other materials. But, he had not seen any of the design layouts or concepts before I placed the 3lb piece in his hands around noon.


As Jerry went page-by-page, and he took his time, he would often remark "Wow!", and laugh a bit while he re-read some of the pieces by himself and other magazine staffers.