Would You Look at That!

Kid Rock was on the Tonight Show with Jimmy Fallon last night where he showed the world what his forthcoming album cover looks like. 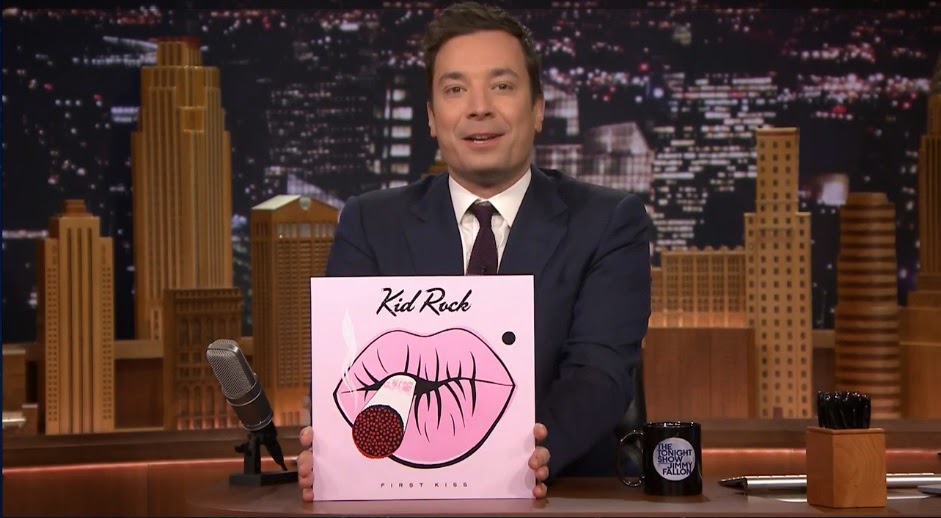 For me, it's fascinating how this thing has flowed from Niagara's hand in the early 1990s to the original owner to my purchase in 2011. When I bought it that brought the piece back to Niagara's radar since she didn't have a photo of it. That opened the door for her to start making prints (get one NOW before they are GONE). I loved having the original on my wall, over my bed for about 3 years. Finally, it's a great honor to get Kid Rock's support of the book campaign, sending him my original, and now seeing this piece that was on my wall for years as his new album cover!

When I put the original up for $20,000 to help fund the campaign I never thought ANYONE would pony up the cash to get it, let alone someone like Bob who would find an amazing way to use such an iconic image. It is an image my friend Rick Manore (former owner of CPOP) says is Niagara's "soup can", a reference to Andy Warhol's iconic piece.

It's been an amazing to see how all this happened in just about a month!

The Campaign was a Smashing Success! THANK YOU!

I can’t believe we did it! Amazing! Thanks so much to the 84 donors who joined to help raise a grand total of $25,871!  Every dollar counts and Wayne State University Press will be putting it to good use making sure that this book gets the treatment it deserves in order to tell the history of Detroit’s alt-publishing scene from 1978 to today with heavy focus on WHITE NOISE, FUN, and ORBIT!
Read more »
Posted by Rob St. Mary at 9:45 AM No comments:

The Fundraiser Goal is CRUSHED Thanks to Kid Rock!

The headline says it all, but, not how it came to be.

A few days after the campaign started I received an e-mail. Opening it while half awake, it got my attention immediately. It was from Bob Ritchie’s sister, Carol. It said that he would like to make a $20,000 donation to Wayne State University Press as part of the fundraising campaign for the ORBIT book.

After I stopped screaming and dancing around my apartment, I think I scared my cats, I composed myself and wrote an e-mail back. I thanked Carol and her brother, better known as Kid Rock, and said I would make sure they received the paperwork they needed as well as the original Niagara painting I was offering for such generous support of the book.